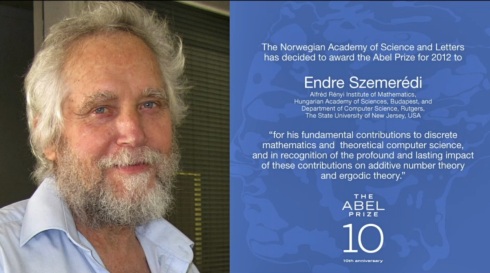 « The Norwegian Academy of Science and Letters has decided to award the Abel Prize for 2012 to Endre Szemerédi, Alfréd Rényi Institute of Mathematics, Hungarian Academy of Sciences, Budapest, and Department of Computer Science, Rutgers, The State University of New Jersey, USA

“for his fundamental contributions to discrete mathematics and theoretical computer science, and in recognition of the profound and lasting impact of these contributions on additive number theory and ergodic theory.“ »

« Discrete mathematics is the study of structures such as graphs, sequences, permutations, and geometric configurations. The mathematics of such structures forms the foundation of theoretical computer science and information theory. Szemerédi was one of the first to realize the importance of theoretical computer science. He has also made deep, important, and influential contributions to many other branches of mathematics and has published over 200 scientific articles.

The President of the Norwegian Academy of Science and Letters, Nils Christian Stenseth, announced the winner of the 2012 Abel Prize at the Academy in Oslo today, 21 March. Endre Szemerédi will receive the Abel Prize from His Majesty King Harald at an award ceremony in Oslo on 22 May. The Abel Prize recognizes contributions of extraordinary depth and influence to the mathematical sciences and has been awarded annually since 2003. (…)

Endre Szemerédi is described as a mathematician with exceptional research power and his influence on today’s mathematics is enormous. Yet as a mathematician, Szemerédi started out late. He attended medical school for a year, and worked in a factory before he switched over to mathematics. His extraordinary talent was discovered when he was a young student in Budapest by his mentor Paul Erdős. Szemerédi lived up to his mentor’s great expectations by proving several fundamental theorems of tremendous importance. Many of his results have generated research for the future and have laid the foundations for new directions in mathematics.

Many of his discoveries carry his name. One of the most important is Szemerédi’s Theorem, which shows that in any set of integers with positive density, there are arbitrarily long arithmetic progressions.

Szemerédi’s proof was a masterpiece of combinatorial reasoning, and was immediately recognized to be of exceptional depth and importance. A key step in the proof, now known as the Szemerédi Regularity Lemma, is a structural classification of large graphs.
(…) »

This site uses Akismet to reduce spam. Learn how your comment data is processed.